If you are facing UCMJ charges while stationed in Korea, you need the guidance of an experienced aggressive military defense lawyer. Cases in a foreign country are often additionally unfair because of the scrutiny placed on them by higher command and due to the local and international media attention. The risk of unlawful command influence (UCI) is even greater when a service member overseas is suspected of a crime. Commanders have a great deal of media and higher command pressure on them to prosecute in these cases and the rights of the accused service member is often only an afterthought. Only the best aggressive military defense lawyer can even the playing field.

The Risks of a Military Court Martial in Korea

Criminal convictions during your military service can ruin all the awards you have received in your military record so far and end your military career with a punitive or negative discharge. Such a discharge can make it impossible to find employment that is in line with your qualifications even after your military career is over. Even worse, a court-martial conviction without the best possible military defense usually results in significant prison time for you and the loss of financial support for any family you may have. Not only do you lose your freedom but they lose your pay, your BAH and TriCare. To ensure that you mount the best defense when facing a military investigation and court-martial, you need an aggressive, experienced military defense lawyer in South Korea.

The experienced military defense lawyers at Freeburg Litigation have earned a reputation for defending service members at military installations worldwide. If you are stationed in South Korea and are suspected of a military crime, then having the most hard-hitting criminal defense lawyer can be the difference between getting convicted or winning your case. Our military criminal defense lawyers represent Soldiers, Marines, Sailors and Airmen in both UCMJ and administrative matters to include defending service members accused of sexual assault, murder, rape, child rape, fraud, theft and other offenses under the UCMJ, often receiving full acquittals or an acquittal on all of the serious charges with a very light sentence on the remaining charges.

After trying complex commercial cases in federal court in New York City, Nathan Freeburg entered active duty with the U.S. Army where he deployed to Iraq and practiced as a prosecutor, as a Division Chief of Military Justice, as a military defense attorney and then was handpicked to train and advise Army defense lawyers worldwide for the U.S. Army Defense Counsel Assistance Program. During his time on active duty, Nathan tried or consulted on the most well-known cases in military, some with worldwide recognition and developed an expertise in cross-examining alleged sexual assault victims, law enforcement agents and senior military commanders. Having defended service members for allegations in and out of the U.S., this aggressive Korea military defense lawyer has extensive experience handling different kinds of charges including sexual assault, murder, theft, rape, child pornography, Article 31, NJP, separation and discharge proceedings. If you are facing any kind of military legal problem, talk to Nathan Freeburg for experienced advice and the best aggressive military defense.

Service members stationed in South Korea deserve the best military lawyers to represent them at their court martial or administrative separation proceeding.
If you or a family member are stationed in Korea and are suspected of a military offense such as sex assault or if you are facing an administrative separation, Article 15, show cause board, letter of reprimand or GOMOR, then call our military defense lawyers immediately.

Since World War II, U.S. service members have been prosecuted by court-martial under the U.C.M.J. in Korea. Under the Status of Forces (SOFA) agreement with South Korea, United States service members will generally be prosecuted by the U.S. military. Allegations against American military in South Korea often draw heavy scrutiny and are heavily politicized due to frequent protests at the American presence. In addition, American commanders in South Korea often react by instituting curfews, leading to even more potential UCMJ charges.

Kunsan Air Force Base is located on the coast of the Yellow Sea in western South Korea and falls under the command of the United States Air Force. It is currently one of only two United States Air Force installations in the Asian peninsula, with the other being found in Osan, nearly 6 hours away. Located approximately 150 miles from the capital city of Seoul, Kunsan Air Base is often referred to by multiple names. The official name of the closest city is Gunsan, which the base is sometimes called. The name Kunsan is used by locals and the US Government to try and differentiate the base from the city.
The history of Kunsan Air Base dates back to the years before World War II. The base was established in 1938 by occupying Japanese forces as an operating base. After the Japanese withdrawal, the United States took over the base. It first saw a limited use in 1945 and a few trials by court martial, and by 1949 only a small handful of U.S. troops remained in the area. The close of 1949 saw the complete withdrawal of US troops from the Korean Peninsula, leaving the base completely vacant.

The Korean War brought Kunsan Air Force Base back into action and the gradual expansion of U.S. facilities, eventually including a robust OSI presence and trials by court martial of Airmen under the UCMJ.

Osan Air Force Base is located in the northern part of Korea, only 64 km away from Seoul. Osan was actually built from scratch by the American forces during the Korean War on the site of the Battle of Bayonet Hill in 1951. The base construction began in 1952 and in the first months of 1953, multiple bombing operations were run from this base. Trials of Airmen by court martial under the UCMJ began then. The 51st Fighter Wing and the 7th Air Force are tenants of Osan Air Force Base.

How Military Trials Under the UCMJ Began at Camp Carroll

Camp Carroll is a small Army post located in Waegwan in the south east part of South Korea. The camp is named after Sergeant First Class Charles F. Carroll of the 72nd Combat Engineer Company, 5th Infantry Regiment. He was a posthumous recipient of the United States Distinguished Service Cross for his heroism during the Korean War.

Camp Carroll is a 546-acre Army base in South Korea with a total population of approximately 2,700. Of this number, 1,200 are Eighth Army military personnel. Other residents include civilian personnel of the U.S. Department of Defense and Korean Augmentation to the US Army (KATUSA) personnel. KATUSA is composed of Korean soldiers assigned to the US Army who work, train and live with their American counterparts. Korean national employees and non-command sponsored family members are also part of the community. Personnel assigned to the camp work with US personnel, American civilians, Korean Military personnel and Korean civilians. In 2006, the creation of the Installation Management Command (IMCOM) and its subordinate, the Installation Management Command Korea (IMCOM-K) reorganized the US Army Garrison Daegu. With its headquarters at Camp Henry, Daegu, the Army Garrison was given the authority over Camp Carroll installation. Since, the US Army Garrison Daegu has been tasked to give base operations services to both military and civilian personnel and dependents living and working at Camp Carroll.

Soldiers at Camp Carroll are generally not tried by court martial under the UCMJ at Camp Carroll, but rather sent to other Army posts in Korea for trial.

How Military Trials Under the UCMJ Began at Camp Casey

Camp Casey is located at Tongduchon, which is approximately 40 miles north of Seoul. This U.S. Army post is currently home to a population of approximately 8,800 individuals, 6,300 of which are military personnel. From its original inception during the start of the Korean War in the early 1950’s, Camp Casey was later renamed during the year 1952 in honor of Major Hugh Boyd Casey who died of a plane crash after his arrival in 1951.

After the founding of Camp Casey, investigations and trials by court martial of Soldier under the UCMJ began. 1994 saw the transfer of the 2ID headquarters from Camp Casey to Camp Red Cloud. Alleged curfew violations are a common source of UCMJ punishment at Camp Casey.

How Military Trials Under the UCMJ Began at Camp Humphreys

Camp Humphreys is located about 90 km from Seoul and close to Anjeong-ri. It hosts almost 10,000 Soldiers and many additional personnel. The history of Camp Humphreys starts in 1919 as the Pyongtaek airport, built by the Empire of Japan. When the Korean War started, it was expanded and named K-6. Trials by court martial under the UCMJ of Airmen began then. The current name was given in 1962, in the memory of Benjamin K. Humphreys, who was killed in a helicopter crash close to the base.

Today, Camp Humphreys hosts CID and prosecutors, all investigating and prosecuting Soldiers under the UCMJ.

How Military Trials Under the UCMJ Began at Camp Red Cloud

Initially established as Camp Jackson, Camp Red Cloud is located in Uijeongbu, north of Seoul and relatively close to the DMZ. The military base was renamed in the memory of Mitchell Red Cloud Jr., who was awarded with the Medal of Honor. The base spreads over 164 acres. The 2ID Headquarters is located here, adding additional command scrutiny on investigations.

Soldiers are also investigated and tried by court martial here.

How Military Trials Under the UCMJ Began at Yongsan

USAG Yongsan was actually a military base built by the Empire of Japan at the beginning of the 20th century. Yongsan is scheduled for eventual closure and return to the government of South Korea.

Currently, USAG Yongsan is the headquarters of the American presence in South Korea. Located in downtown Seoul, it hosts many Army headquarters facilities, including an office filled with Army prosecutors and a courtroom to try Soldiers by court martial under the UCMJ. The courtroom is located in walking distance from the Dragon Hill Lodge. 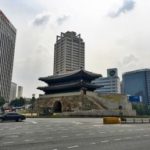