If you are facing UCMJ charges while stationed in Bahrain, you need the guidance of an experienced aggressive military defense lawyer. Cases in a foreign country are often additionally unfair because of the scrutiny placed on them by higher command and due to the local and international media attention. The risk of unlawful command influence (UCI) is even greater when a service member overseas is suspected of a crime. Commanders have a great deal of media and higher command pressure on them to prosecute in these cases and the rights of the accused service member is often only an afterthought. Only the best aggressive military defense lawyer can even the playing field.

The Risks of a Military Court Martial in Bahrain

Criminal convictions during your military service can ruin all the awards you have received in your military record so far and end your military career with a punitive or negative discharge. Such a discharge can make it impossible to find employment that is in line with your qualifications even after your military career is over. Even worse, a court-martial conviction without the best possible military defense usually results in significant prison time for you and the loss of financial support for any family you may have. Not only do you lose your freedom but they lose your pay, your BAH and TriCare. To ensure that you mount the best defense when facing a military investigation and court-martial, you need an aggressive, experienced military defense lawyer in Bahrain.

The experienced military defense lawyers at Freeburg Litigation have earned a reputation for defending service members at military installations worldwide. If you are stationed in Bahrain and are suspected of a military crime, then having the most hard-hitting criminal defense lawyer can be the difference between getting convicted or winning your case. Our military criminal defense lawyers represent Soldiers, Marines, Sailors and Airmen in both UCMJ and administrative matters to include defending service members accused of sexual assault, murder, rape, child rape, fraud, theft and other offenses under the UCMJ, often receiving full acquittals or an acquittal on all of the serious charges with a very light sentence on the remaining charges.

After trying complex commercial cases in federal court in New York City, Nathan Freeburg entered active duty with the U.S. Army where he deployed to Iraq and practiced as a prosecutor, as a Division Chief of Military Justice, as a military defense attorney and then was handpicked to train and advise Army defense lawyers worldwide for the U.S. Army Defense Counsel Assistance Program. During his time on active duty, Nathan tried or consulted on the most well-known cases in military, some with worldwide recognition and developed an expertise in cross-examining alleged sexual assault victims, law enforcement agents and senior military commanders. Having defended service members for allegations in and out of the U.S., this aggressive Bahrain military defense lawyer has extensive experience handling different kinds of charges including sexual assault, murder, theft, rape, child pornography, Article 31, NJP, separation and discharge proceedings. If you are facing any kind of military legal problem, talk to Nathan Freeburg for experienced advice and the best aggressive military defense.

Service members stationed in Bahrain deserve the best military defense lawyers to represent them at their court martial or administrative separation proceeding.

If you or a family member are stationed in Bahrain and are suspected of a military offense such as sex assault or if you are facing an administrative separation, Article 15, show cause board, letter of reprimand or GOMOR, then call our military defense lawyers immediately.

NSA Bahrain used to be a local and national military base run and operated by the British Royal Navy. United States Navy activity and theoretically trials by court martial began in 1971. At the time it was a small facility only 10 acres wide and was later renamed to Administrative Support Unit Bahrain. In 1997, both Bahrain and the United States of America began building. The facilities that were once built in Juffair were upgraded.

Under the Status of Forces (SOFA) agreement with Bahrain, United States service members will generally be prosecuted by the U.S. military and not by Bahrain.

In 2010, the United States Navy took on a five year, $580 Million program to double up the size of the current base. New and modern buildings and facilities were raised by the end of this project, not to mention barracks, recreational centers and administrative buildings. 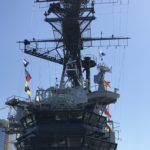